The Santuary consist of 3 main divesites that are reachable from Phi Phi or Phuket.

Divemap of King Cruiser Wreck
On the 4th of May 1997, the 85 metre passenger ferry King Cruiser made history by straying several miles off course on a routine run from Phuket to the Phi-Phi Islands and hitting Anemone Reef. The boat sank near the reef but thankfully no lives were lost among the 500 people on board.

Previously Phuket's dive sites had lacked a large sunken wreck for divers to explore so although the accident was unfortunate for the ferry owners and passengers alike, the boat has become one of the most popular dive spots in this area. Not only is the wreck located near 2 other great dive sites, it lies in an almost perfect upright position at a depth at 30 metres, with the captain's cabin located at the shallowest area of 12 metres.

The Kingcruiser wreck is 25 metres wide but is not safe for penetration as in August 2003 the floor of the stern top deck collapsed through onto the main deck. In more recent years there has been significant deterioration to both the midsection and the bow areas too. However, exploring the outside of this Phuket diving wreck is still an exciting experience and over time this will become an even better dive site as the wreck becomes more encrusted with a variety of colourful corals.

At the back of the wreck at around 32 metres you can see the twin propellers where lots of lionfish live. The toilet area at the rear of the main deck is also home to lionfish and they are the largest ones found at any of the local sites. There are numerous scorpionfish living on the wreck too which can be hard to spot as they are so well camouflaged against the rusting steel and corals.

There are many different fish all over the wreck, some can be seen in large schools. You will encounter rabbitfish, surgeonfish, and fusiliers among others and huge schools of trevally, mackerel and yellowtail barracuda. There are also eels and numerous crabs. However the 2 frequent visitors that are most popular with divers are a large hawksbill turtle and an enormous great barracuda.

The wrecks location near to Shark Point has undoubtedly had much to do with its soaring fish population, and the older and more broken up the wreck becomes the more fish it attracts. It seems strange that the fish prefer to live in a rusting metal hulk rather than the natural sanctuaries of Anemone Reef and Shark Point but it makes for a great Phuket dive location! 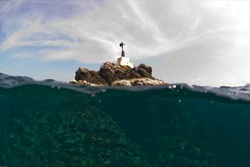 Phuket Shark Point
Shark Point is made up of 3 large rock pinnacles, the largest of which breaks the surface and appears as a tiny rock outcropping when approaching from the sea. Beneath the surface lies a large multicoloured reef the size of which surprises most people. The rocks reach a depth of about 18 to 20 metres and teem with an abundance and vast array of marine life. The sheer density and diversity of coral and fish life makes diving here a wonderful, visual experience.

As well as leopard sharks, bamboo sharks can be found here hiding under the coral ledges but there is so much more to see aside from the sharks. There are vast schools of tropical fish, plenty of purple and pink coloured soft corals and sea fans that decorate the limestone pinnacles, as well as huge barrel sponges. The 3 pinnacles form 3 main sections to the reef and several days can easily be spent exploring the different facets of the site. Literally every surface is covered in something alive and the surrounding water is filled with fish!

Schools of fusiliers are all around the reef along with glassfish which form a constantly moving carpet over the rocks. Hunting trevaliies cause these schools to disperse intermittently. Lionfish are seen all over the reef - sometimes as many as 20 in one dive! Scorpionfish are also common but harder to spot as they are incredibly well camouflaged against the coral. There are many different types of pufferfish including the yellow boxfish. Moorish idols and bannerfish are plentiful and blue-ringed angelfish and emperor angelfish are also common. The very timid potato groupers can grow up to 1 metre long.

There are plenty of moray eels living in the crevices and banded sea snakes can be seen in the shallower areas. Just off the south west corner of the main rock lays a small outcrop at 18 metres deep which is home to a bright yellow seahorse. Keep a sharp eye out also for banded boxer shrimps, hinge-beak shrimps and white-eyed morays.

From the relatively steep main rock pinnacle, the reef flattens out to the south until it rises towards the surface again several hundred metres away. Currents can be strong at this site providing plenty of nutrients for the hundreds of different species of hard corals and tropical fish. There are plenty of places to shelter from the current and when it runs in the right direction it can allow for an excellent drift dive back to the dive boat. 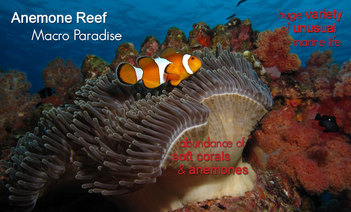 Anemone Reef
Anemone Reef gets its name from the mass of gorgeous blue and green coloured anemones that cover this huge lime-stone pinnacle. Its Thai name is Hin Jom which means 'submerged rock' and this is a popular and beautiful Phuket dive site. Located about 600 metres north of Shark Point Marine Sanctuary, the rock rises 30 metres up from the sea floor to just beneath the surface then abruptly ends and drops back to a bottom of sand and oyster shells.

Vast fields of sea anemones cling to every conceivable surface and gently sway in the current creating the illusion that the giant rock is alive. As expected there are plenty of colourful anemonefish and clownfish living and hiding among the anemones that make great photo opportunities.

Diving this Phuket site usually begins with a descent to the bottom of the pinnacle from where you can then slowly circle your way up the pinnacle. Currents can be strong here at times so it's advised to navigate the reef by zigzagging to avoid finning against the current.

The profusion of sea anemones and the nutrient-rich water are a magnet to a vast array of reef fish found feeding or taking shelter. Large schools of tropical fish abound including various species of snapper, grouper and fusiliers, as well as soldierfish that congregate together in the crevices. Red-tailed butterflyfish, bannerfish, Moorish idols, trumpet fish, cornetfish and parrotfish are all common here as at the other Phuket dive sites.

Anemone Reef is also a well-known site for common and spotfin lionfish, sometimes encountered in-groups of up to 10. You can see them gliding about in the open or resting in the barrel sponges away from the current. The barrel sponges dot the lower slopes, and you can sometimes find large bearded scorpionfish resting inside them too. Away from the barrel rims, these fish are often difficult to spot as they are able to change their skin colour and markings to perfectly blend in with the granite rocks that they rest upon.

The pinnacle's eastern slope is covered in huge lemon sea fans. Look closely as they provide a safe haven for smaller critters such as the yellow tiger-tail seahorses. You can spot them at the deeper levels of the site but it takes a good eye and patience!

In the shallower parts of the dive, look in and around the anemones for their resident fish; you can see plenty of skunk, pink, Clark's and tomato anemonefish, among others. However, they are not the only creatures to inhabit the anemones; porcelain crabs can be seen hiding here along with shrimps. Damselfish such as the 3 spot dascyllus are also seen everywhere.

Anemone Reef's proximity to Shark Point means you are likely to see a leopard shark passing by, also larger game-fish like tuna and barracuda. You may even spot a hawksbill turtle that is frequently seen here and on the King Cruiser Wreck.