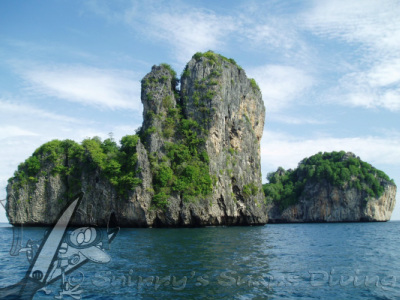 Bida Nok & Bida Nai
Bida Nok means outer father and is a small but steep limestone island less than two kilometres south of Ko Phi Phi Leh. Its has like Ko Bida Nai several distinctive underwater diving environments, which make it one of the best diving places in Thailand and with not without reason.
Most divers follow the same dive plan and start near a small sheltered bay on the south side of the island. From there it is a shallow gradually descending dive along a ridge named Finger Reef. Once you reach its edge around its south point you will find a steep wall which is decorated in vibrant anemones, brain corals, bubble corals and huge sea fans. The current picks up and brings several larger species such as tuna and jacks. The white sand is a very good place to spot khul stingrays and leopard sharks. Other sharks such as the black tip reef shark, bamboo shark and even whale sharks have been reported occasionally. Inside the cracks and crevices are nudibranches, moray eels, scorpion fish, seahorses, harlequin ghost pipefish and other macroscopic marine life.
In the west of the island you will find a jumble of boulders, swimthroughs, turtles and reef sharks.
The east is an easy sloping reef with many reef fish around its patches of coral. Whichever dive site you choose, you will be stunned by its pittoresque settings, remoteness and colourful but densely populated aquatic life. 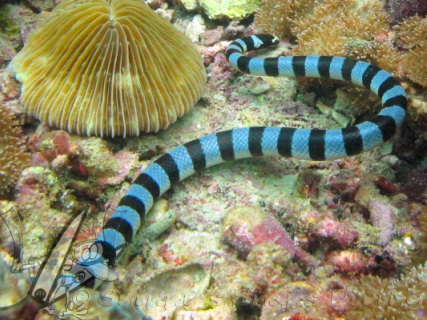 Banded Sea snakes are an often sight
Ko Bida Nai is translated to inner father and is as beautiful as its neighbour  Ko Bida Nok, just a hundred meters south.
Most divers start their dive by using one of the mooring lines that is attached to a rock which makes an excellent swimmthrough.
It actually is an archway filled with silver glassfish that opens the door to a spectacular hard coral garden once you use your fins to swim through it.
Nearby is a large coral outcrop called Fantasea Reef which is where most divers spend all their time. Fantasea Reef is an area with very rich coral formations and quite some pelagic species such as barracuda's, tuna and jackfish. Some of the more impressive creatures you can see around here are orange-lined triggerfish and crocodile long-toms.
Wherever you dive around this small limestone island there is always something to see and you will have the dive of your live. 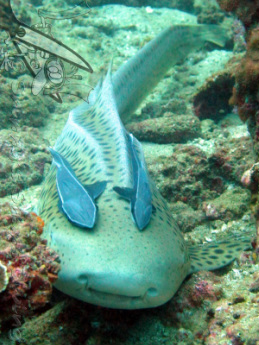 Phi Phi Sharkpoint - almost certain to find Leopard Sharks there
also known as Phi Phi Sharkpoint.
Hin Bida is a small rocky outcrop about 8km southeast of Phi Phi Ley. It stands proud of the water by a mere 1m.

This easy dive follows an area of submerged rocks immediately northeast of the outcrop. These gently slope down northwards to sand at 18m. Divers can enjoy shoals of colorful Reef-Fish, including Blue-lined Snapper and Harlequin Sweet Lips, not to mention more static attractions like multicolored Plume Worms, Feather Stars and Crinoids. This location's name refers to the overwhelming presence of Leopard Sharks. sometimes Nurse or Reef sharks are also spotted on this site.
There are also lots of Cuttlefish, Squid and Titan Triggerfish. Large Undulated and Golden Moray Eels, Spiny Lobsters and Octopuses attempt to obscure themselves within the many craggy holes and crevices.
If you are visiting Phi Phi during February - April and you are diving here, also look out in the blue with luck a Whaleshark maybe passing this point.
Source:
Moskito Diving
Greatest Divesites.com
divetheworldthailand.com
Aangestuurd door