The Near Islands are a cluster of three islands 5-7 km. off Pattaya. The islands are Koh Larn, Koh Sak and Koh Krok. Koh Larn translates to “Coral Island” in Thai while Koh Sak and Koh Krok are so-named because they resemble a mortar and pestle, the kitchen tools used to crush peppers. Although the near islands are the most heavily dived sites in the area, they are also well-known sites good for new divers with growing populations of sea turtles, three species of small sharks and home to the HTMS Kood and HTMS Mataphon wrecks. 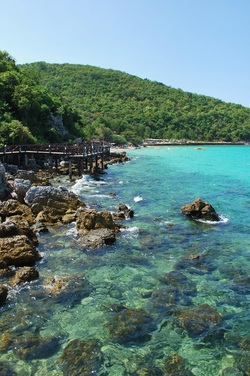 Koh Larn - view of east side
Koh Larn is the largest of the Near Islands with four main dive-site areas: Shark Point,Hat Nuan, Saxophone Bay and Laem Tong. Fish life is quite varied with cuttlefish and turtles commonplace. Depth in the area actually runs down to 40 m., but most of the diving is done in the 9-15 m. range.

To the northeast of the bay towards the island cliff face divers will find a flat sandy bottom with many large coral heads and groupings, Here you’ll find numerous Giant Sea and Elephant Ear anemones with their resident black and white Clownfish.

Shark Point, as the name suggests, is a good place to see juvenile Tawny Nurse and Bamboo sharks, although as they are nocturnal creatures you will need to be looking under corals and rocks to spot them. The maximum depth at Shark Point is 22 meters for soft corals, with a drop-off on the western side offering a series of coral ledges down to around down to more than 40 m. There is little to see other than sand at that depth, however.

Laem Tong, or “Golden Bay,” is on the western side of Koh Larn and continues to get deeper. This bay has the deepest diving in the near-in islands chain at 50 meters. As such, a lot of diveshop often uses it as part of its technical diving courses and for the PADI Deep Diver specialty course.

Laem Tong also has some very nice hard corals in at around 7-10 m., so it is a multi-purpose dive site that can serve all needs. It’s an outstanding site with a series of small walls, definite line dividing hard and soft corals, tawny nurse sharks and blue spotted ribbontail rays  are virtually guaranteed. if you are really lucky you can even get a eagle ray gliding through the water in the sandy areas of the bay

Hat Nuan is best known for the sunken restaurant. Through a mistake in Thai engineering, the restaurant was built on supports that collapsed under the weight of the building and battering of the current before it even opened.

Parts of the restaurant are underwater and at the waterline. And perhaps the most notable feature of this site is a set of vertical concrete tubes teeming with coral, some small caves, good for practicing skills in PADI’s Peak Performance Buoyancy specialty course.

Saxophone Bay, just next to Hat Nuan is one of the best places to dive and find turtles sleeping on coral or swimming around. the site has very nice hard corals in at around 4-10 meters with a dropping finger-reef to approx. 15meters. you will find massive brain corals here, which some even have a swim through area.  further is an abondance of different smaller fish swimming in this area and several nudibranches are spotted here. 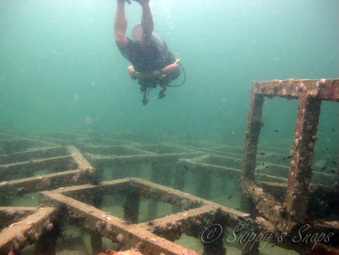 Artificial Reef on Koh Sak West
Koh Sak offers numerous dive sites between three and 20 m., split between the eastern and western sections of the island. Both sites start in a sheltered bay which makes them a very good training ground for students and perfect for those divers who have not dived in a little while and want a nice relaxing first dive back in the water.

Both sites have plentiful amounts of hard corals and abundant fish life including Jacks, Rabbitfish, Wrasse, Butterflyfish, Angelfish and thousands of Damselfish to name but a few. But the stronger currents that also can be found here at times offer more-experienced divers a bit more challenge. This bay is, however, well protected from the prevailing winds for most of the year and the water is calm and clear.

At the deepest point – 26 meters – you might be lucky enough to catch soft corals and hydroids fully open on a flat sandy bottom with sea horses, pipe fish and dragon fish all in attendance. However, this happens only at certain points in the day, so the timing has to be right to catch all the pastel and fluorescent colors.

Koh Sak East also offers some man-made attractions: The Cubes. These are concrete blocks at exactly 10m depth. Following them on a due-south heading you can hop from cube to cube in a drift dive. Turtles and stingray abound and giant pufferfish are not uncommon. Besides The Cubes, there are hard corals down to 26 m.

Moray eels can be found if you look closely in rocky crevices. The southern end of the island is spared the current, but marine life is also less abundant. The north side offers a sandy expanse ideal for training and micro-biology enthusiasts.

Similar to Koh Sak East, Koh Sak West also has an artificial reef area consiting of cubes, which is on the inside bay area at a depth between 7-12 meters. The difference with the East Side is that here all cubes are stacked together making it a nice divesite on itself with loads of juvenile barracuda swimming around the cubes. or you can find Scorpionfishes hiding on them, Boxfish swimming through them or even a Batfish that is swimming in the area around them 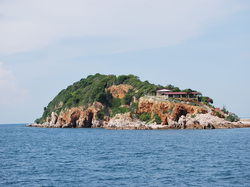 Koh Krok
The innermost of the Near Islands, Koh Krok is a finger-shaped island that sits along the tidal flow line and therefore is a great place for a drift dive. There are areas of dense soft coral and anemone gardens here feeding off the current along with the requisite Clownfish. The site has a maximum depth of around 11 m., but is long enough that even with quite a reasonable drift a 45-50 minute dive can easily be done.

The corals are located on the western face and southern tip. They start at around 15 m. and the large Staghorn, brain, mushroom and table corals can each the surface. Neptunes, barrel and blue sponges highlight the soft-coral population with bushy Antipatharian corals at the deeper depths.

The southern end of Koh Krok is home to turtles, pufferfish, parrotfish, Half-and-half and six-banded wrasses are also plentiful. One western section has a forest of giant sea anemones and schools of small barracuda, jacks and tangs can be found at the northern tip. There are even a few small caves at the southwest end allowing entry at high tide.

One last interesting feature here is an artificial reef project conducted by local divers a few years back. Car and truck tires and cement blocks were dropped in the water and, over the years, soft corals, mussels and sponges grew up on them.