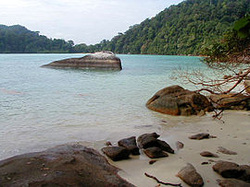 The main attraction for most visitors to Mu Koh Surin is the fact that it is an unspoiled tropical paradise far from the mainland, with healthy forested islands, surrounded by clean water and a profusion of coral reef species. The coral reefs are the best, most diverse coral reefs accessible to snorkellers, as they are generally shallow and so scuba equipment is not required. The islands also attract great research interest, and many scientists visit the islands each year for a variety of reasons, ranging from coral reef surveys to bird observation.

Around the Surin Islands
The 2 large islands of the Northern Surin Island (Koh Surin Nua) and Southern Surin Island (Koh Surin Tai) are twinned very close to each other. They are separated by 200 metres of shallow sea which can be walked across at low tide. The other 3 islands are rock islands with some dwarf trees and rainforest plants. The islands are surrounded by one of the biggest and most fertile shallow coral reefs in Thailand.

The park is reached by boat from Kuraburi in Phang Nga Province. A private tour boat departs from Kuraburi Port at 09.00 am everyday and arrives at the park headquarters, northern Mu Koh Surin at 11.30 am. From the port to this island, it's about 60 kilometres which takes about 2.30 hours journey time. The return boat from Mu Koh Surin to Khuraburi Port departs at 13.00 am everyday. This service is closed from May 16 to 15 November every year during the rainy season. Some dive boats from Phuket and Khao Lak also dive the Surin islands as part of a Similan/Surin liveaboard safari.

Flora and FaunaMarine LifeThe clear and unpolluted seas around the islands are home to healthy populations of hard and soft corals, starfish, feather stars, lobsters, clams, anemones, crabs, sea pens and a rich diversity of fish including parrotfish, damselfish, triggerfish, lionfish, angelfish, batfish, grouper and reef sharks to name just a few. Whale sharks and whales are occasional visitors to the area.

There are 3 types of giant clams found on the fringing reefs of the area. They are Tridacna Maxima, Tridacna Scuamosa and Tridacna Crocea. A 1999 UNESCO funded survey found the area suitable for a spawning project to increase the number of clams in the area. The same survey team also found 29 species of edible invertebrates including jellyfish, crabs, bivalves, polychates and cephalopods. Sea cucumber numbers were found to be far lower than in a similar 1994 survey due to over fishing by the Moken fishermen for sale and barter. Sea cucumbers were recommended for total protection to allow stocks to recover naturally.

Sea turtles still nest on the Surin Islands, with 2 species coming ashore to lay their eggs, Hawksbill and Green turtles. In the early 1990s a few of the rare Olive Ridley turtles also nested there. Hawksbill turtles are most common and Mu Koh Surin is arguably the best place in Thailand for swimming with sea turtles. Protecting the turtles nesting sites is one of the parks main responsibilities.