The Far Islands are composed of five uninhabited isles about 15 km. off Pattaya. Because these sites are farther from the city, they don’t get the volume of boat and jet-ski traffic as the Near Islands and tend to have better visibility. It takes about 90 minutes to get there, but the sites are worth the trip.

The Far Islands are home to large amounts of jacks, trevellys, barracuda, rabbitfish, angelfish, butterflyfish, wrasse, gobis and damselfish and reef rays. Some small sarks and turtles can also be found here. 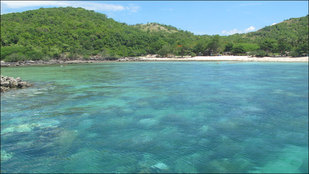 Koh Rin Bay
Koh Rin, the southernmost of the island chain, has three dive areas, each of which can easily support more than one dive.

South Rock, or “Hin Ton Mai” in Thai, sits at the southern tip of the low-lying, rocky outcrops at the far south of the Far Islands chain. It’s arguably one of the best dive spots in Pattaya, with Moray eels, barracuda, and plenty of both hard and soft corals, coral whips and very good invertebrate life, including nudibranchs, brittle stars and feather stars.

During periods of northerly wind, South Rock is accessible for novice divers, but when the winds turn south it’s best for experienced divers due to larger waves.

The coral here falls into two categories: fringing reef and patch. While dives will start out with sparse life to see, the scenery changes as you head south with dense coral and rocky terrain. Soft corals, particularly, Elkhorn and foliaceous, are common in the shallower waters with sea whips, gorgonian sea fans and stinging hydroids prominent at the base of the reef. Barrel and encrusting sponges are everywhere and marine life is plentiful.

North Rock, or “Hin Khao,” has most of the good diving at around 9 m. with maximum depth at 15 m. But strong currents can sometimes restrict this site to experienced divers with visibility in the 5-15 m. range.

North Rock doesn’t have as much coral life as South Rock but does feature outcroppings that host sharks and eels. It’s an excellent site for searching for the more-unusual nudibranchs, pipefish, razorfish and others that like to hide away. The site has good diving down to around 14 m.

The coral life is composed of mostly patch corals, due to being buffeted by strong currents in both directions. The southern tip has large rocks and a sandy bottom while the eastern shore sees plate corals drop and bottom out at around 10 m. After that, you’ll find large rocks covered in whip and soft corals.

The shark are the gray bamboo variety and will be sleeping under rocks and coral. Go deeper and you’ll find patches of sea whips, feather starts and colorful nudibranchs. You’ll also regularly see barracuda, jacks, trivializes and even a school of tuna have been spotted.

Koh Rin Bay, unlike the two rocks, is actually part of the main island. Conditions here are best between November and March with visibility year-round between 5-15 m. although this site is not deep., it is well protected from currents and is therefore a nice relaxing dive when compared to both South and North rocks.

The bay features a steadily sloping reef that drops dramatically to the north in the south eastern bay. At this site a higher percentage of corals slowly begin to dominate the rock to about 12 m. Here you’ll find some sea whips and black coral bushes. The marine life includes harlequin sweetlips, snappers, squirrelfish and lionfish.

Koh Man Wichai
Perhaps Pattaya’s best dives when conditions are good, Koh Man Wichai is wildly unpredictable and divers likely will be disappointed if they hit it on a bad day. Diving off the island centers on two area: “The Wall,” a 7 m. coral wall that cannot be completed in one dive, and “The Fingers,” a set of rocks stretching out from shore to 12 m.

The Wall runs down from 9 m. to 23 m. and is a dive in itself. But the area around the wall is also a singular site running from the bay along the coral line out to 18 m. There is a good sampling of lettuce, vase and carnation with the shallows boasting clusters of Staghorn and cauliflower corals. Towards the island’s southern tip, you’ll find Honeycomb groupers, fields of carpet anemones, mounds of star corals, plume worms. large red snappers and schools of yellowtail fusiliers.

The Fingers cover an area running 12-15 m. Hard coral and fish life are very good and across the five fingers and diving this “large hand,” you’ll not even notice there isn’t a thumb.

From the beginning of the dive, the sea-bed is covered with smooth porite corals. The water here is only about 4 m. Follow the patches of coral deeper down to 13 m. and you’ll find gardens of sea anemones and three-spot and Dascyllus symbiotes and pink anemone fish. 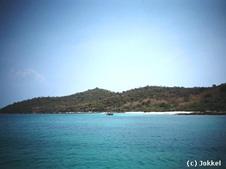 Koh Phai
his island is controlled by the Royal Thai Navy, so use of the beaches is restricted. There is, however, some good diving off the south side of the island. The small sheltered bay is excellent for beginners. But the main attraction of Koh Phai is the wreck of the HTMS Khram at 26 m. This WWII landing craft was sunk in early 2003 to create an artificial reef and is detailed on its own page.

Diving around the island’s southern headland is more typical than spectacular. The reef here is populated with sponge-encrusted rocks and large mounds of star corals with the occasional cluster of smaller, less hardy corals. The hard corals tend to dominate the shallower water: coral laminates form terraces that descend to deeper-water areas where long, spiraling sea whips are embedded among larger rocks.

The lower reef-slope is highlighted by soft corals that are neither as radiant nor large as they could be due to high salinity in the bay waters. Marine life is fair, however, with parrotfish, wrasse and puffers common. Away from the reef, juvenile snappers, jacks and fusiliers are common.

Koh Klung Bedan is another small dive site that is also quite shallow, maximum coral depth being 12 meters. This dive site has many Staghorn and table corals as well as boulder corals that have many Christmas Tree worms. Currents are generally weak to moderate, allowing snorkeling as well. On the rare occasions when strong currents flow, this is a good site for drift diving.

Average depth here is 6 m., bottoming out at 12 m. To the northwest the reef becomes a relatively shallow fringing reef whose flat and slope consist mainly of rocks and sponges.

Compressed barrel sponges shelter small crustaceans and invertebrates. Marine life is not abundant, though there are some varieties of chromis, basset, blenny, gobies and banner fish, as well as a smattering of Bicolor Parrotfish and wrasse.

Koh Hu Chang is a very small island that, although quite shallow at around 10 m., has some very good corals and abundant small fish life. Koh Hu Chang has more sea anemones than either Koh Rin or Koh Man Wichai and is well protected from the wind, making it a relaxing dive spot.
Source:
Pattaya-Scuba.net
Pattaya Dive Centre
Adventure Diver
a former Pattaya Diveshop - Author BJ
Aangestuurd door