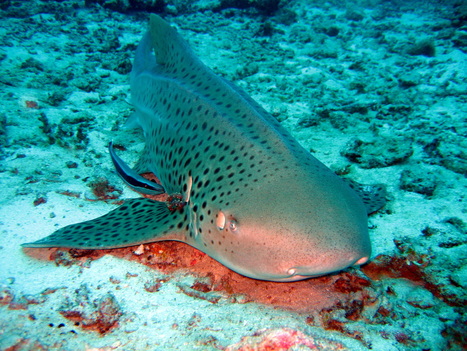 Leopard shark resting in the sand. These sharks can be found on several locations
This large uninhabited limestone island makes up the other main part of the Phi Phi Islands and is home to the world famous Maya Bay which was the location chosen by Hollywood as the perfect setting for the movie “The Beach” starring Leonardo Di Caprio.

The island offers an amazing ten different dive sites, each one unique in its underwater topography and marine life. Phi Phi Leh has several scenic bays which provide the perfect sheltered haven to relax and enjoy lunch and surface interval between the dives.

Underwater the dive sites vary dramatically from shallow sandy bottoms with scattered rocks and boulders covered in several types of hard and soft corals, wall dives where colouful soft branch corals cling to the rock surface to caverns and swim throughs which are a major feature of the amazing diving on offer around Phi Phi Leh.


The Divesites of this island are:
Garang Heng
Garang Heng is one of the reefs two kilometres east of Phi Phi Lae. It is a quiet dive site not often visited by Phuket and Krabi liveaboard tours. The reef is a completely submerged rocky outcrop in the open ocean and is often compared with a famous dive site to the west of the Phi Phi islands named  Shark Point. Coral mainly consists out of soft corals, barrel sponges and sea fans. Bamboo sharks, leopard sharks, blue lined snappers and fusiliers are some of the regularly spotted inhabitants.

Viking Cave
Viking Cave is a bird’s nest gathering area guarded closely by the local birds nest gatherers. Underwater this shallow site ideal for beginners is characterized by table corals and shallow coral gardens.
it is also home to an artificial reef consisting of concrete cubes on which also Coral Nurseries are made

Whaleshark Wall
This site is normally done as a drift dive starting a few hundred meters out of Maya bay. Whale sharks are not common here, but every now and again one drifts by or hovers feeding in the current, hence the name of this site.

Losamah Bay
South of Ko Phi Phi Lae is a bay named Losamah Bay or Ao Loh Samah.
Before entering the bay you will see a very small islet or limestone island that is just large enough to circle around in one nice long dive. Its southern wall goes to within twenty meters deep and being on the seaward side often experiences strong currents. Its northern mini wall only drops down to eight meter deep and is littered with giant clams, angel fish and scorpion fish. Its walls are covered in sea whips, fan coral and gorgonians. In the west of the bay is a beautiful small cave to be found at eighteen meters deep.</p> <p>The shallow bay itself consists out of some hard coral reef formations dotted in anemones. It is popular for snorkellers, dive trainees and as a spectacular night dive. In the dark you will see the wall filled with the eyes of many shrimps, crabs and lobsters.

Maya South
This site starts as a shear wall down to 30 meters with a small over hang and some caves along the bottom, further along fallen rocks have left channels with the rocks towering above you on both sides creating a very dramatic dive.

This is a suitable dive for the more advanced diver, due to depth.

Maya Corner
This dive site it is a great dive for the less experienced diver, only going down to a maximum of 18 meters with plenty of fish life and rocks to look under.

Malong
Reef slope with boulders and partly wall, covered with dendronephtya, sea fans and barrel sponges. A lot of interesting macro life like seahorses, frogfish, ghost pipe fish, shrimpfish, pipefish. Hawksbill turtles are most of the time around.

Palong South
Palong South offers dramatic drop-offs, overhangs and small outcrops of rocks covered in Soft corals of every color. Sea horses and ghost pipefish hide in amongst the sea fans and Gorgonians, turtles drift by stopping to nibble on sponge and bubble coral and Octopuses pose on top of rocky outcrops keeping a watch full eye on proceedings.

Palong North
Palong north is characterized by a flat hard coral plain at 12m that then slopes down to a depth of around 20m where limestone pinnacles covered in Soft Corals and Sea Fans are to be found. There are black-tip reef sharks patrolling in small packs along the plane.

Table Coral City
This is an interesting place to dive, and there is much to see. The topography of the site is a sloping reef with sand and coral patches interspersed with a range of pinnacles. There is also an artificial reef comprising of 100 cement blocks stacked from 18m to around 6m covered with algae and an increasing amount of sea anemones. Regular marine life encounters of leopard sharks.

Phi Leh Wall
Phi Ley wall is a drift dive with an amazing array of soft corals all competing for space; a kaleidoscope of color as you drift by effortlessly in the current. Leopard sharks patrol the wall swimming into the current with ease, while flutemouths and trumpethfish hover motionless waiting to sniper unlucky glassfish 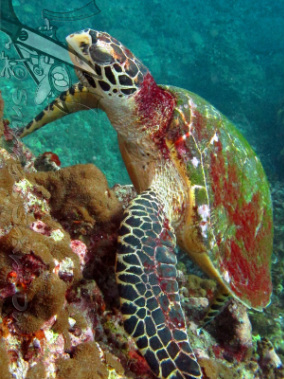 Hawksbill Turtles can be found all around Phi Phi
is the largest of the  Phi Phi Islands, in Thailand. The islands are administratively part of Krabi province. It is the only island in the group with permanent inhabitants.

Like the other islands in the group, Ko Phi Phi Don is a non-volcanic island largely made of limestone. It is almost separated into two islands, but a strand of flat land connects them. On this strand lies the largest town on the island, as well as most of the resorts.

Wang long
This site is well known for its underwater cave systems and is only recommended for experienced divers. The caves tunnel into the rock face in two places and open out into a larger cave where surfacing is possible.


Hin Dot
Four pinnacles just five minutes from the shop. Starting just below sea level and dropping down to around 30 meters often quite dark due to the amount of fish life above you but a fantastic dive try looking under the rocks near the bottom several nurse sharks have been discovered this way.
Source:
Moskito Diving
thailand.greatestdivesites.com
dive-the-world.com
Aangestuurd door