Best known as the home of the famous Hardeep wreck, which is detailed on its own page in the wrecks of Pattaya section.
Samae San also has a collection of islands that are infrequently dived relative to the Near and Far islands chains. As such, they offer some of the best diving in the Pattaya area.

There’s a good amount of sea life about, but micro-scavengers will have a field day with the sandy bottoms. Both soft and hard corals and be found in abundance. There many boulder bommies and literally hundreds of yellowtail jacks that circle around you. 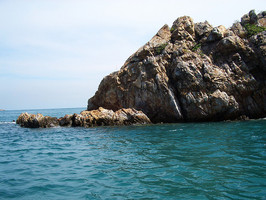 Rock next to Harddeep
Koh Chuang is probably the second most-dived site in Samae San Bay after the Hardeep thanks to its nearby location and hard and soft corals.

It takes about an hour from Samae San harbor, but the ride is well worth it. There is a small cove at the back of the island where if you are really lucky it is possible to find a leopard shark or spotted eagle ray. There is excellent hard coral life, soft antipatharian, whip and anemone corals.

Depth at the site runs 5-20 m., but visibility is, at best, 10 m. Marine life includes an abundance of cuttlefish, parrotfish and turtles. Invertebrate life such as nudibranches and sea horses have also been seen. Bottom line: Although the dive site is quite small it has some very interesting invertebrate life.

Lying to the southeast of Hardeep, Koh Chuang offers diving on its southernmost tip. Here you’ll find large boulder bommies and, deeper, a ridge of soft corals leading down the home of hundreds of jacks and sleeping Tawny Nurse sharks as well as a variety of eels.

“The Rock” is a very narrow fin-like spine of coral reef about 7 km. north of Koh Chuang. Diving here are on the southern and northern ends with depths of 5-25 meters and visibility running 3-12 m. Its rocky ridge offers a great wall dive to the west and a deep slope to the east, but both can also be subject to strong currents.

Unfortunately, its remote location has also made it a favorite of the Royal Thai Navy and Air Force, which use it for bombing practice. There are large amounts of unexploded ordnance all around the site, including large artillery shells and rockets.

However, it still is a terrific drift dive site and, if done right, you can drift from here right on to (or past!) the Hardeep. If you stick around long enough, however, you’ll find many pelagic species, anemones, whip coral, leather coral, barrel sponges and gorgonians. There’s also a good amount of hard corals, barrel sponges and gorgonian sea fans.

Vaguely resembling a submarine, this rock is located near the Sattahip coast. It boasts plenty of brightly colored sea fans, soft corals and barrel sponges. You may spot larger marine life, such as rays and turtles here as well.

The last of the area’s draws is a perilous site known as “The Hole.” A former ammunition dump, the crater drops to nearly 90 m. and savage currents can suck air divers far below safe levels before they realize it. Making matters worse, it sits smack in the middle of the area’s main shipping lane and huge oil tankers can make a barnacle of you as deep as 20 m.

As such, The Hole is best left to those with technical diving certifications, especially ones on nitrox and trimix. There’s not much to see below 60 m. anyway.